1FINITY blades can operate autonomously, since each blade has its own IP address and NETCONF/YANG port for connection to the SDN controller through the DCN. The 1FINITY C200 Communications Integrator Series consolidates multiple IP addresses and DCN connections onto a single connection when a site has multiple 1FINITY L-series (Lambda) and/or T-series (Transport) blades. This greatly simplifies deployment of high-capacity ROADM configurations. The C200 Series also offers site pre-planning and zero-touch turn-up provisioning, cutting the installation time and cost.

This consolidation integrates multiple 1FINITY Transport or Lambda blades into a single node, which simplifies and automates site provisioning for plug-and-play operation. This single logical node presents one IP address to the SDN controller over a single DCN interconnect port. 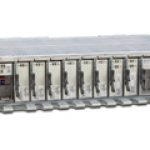